Moat is a term introduced by Warren Buffet through his letters to the shareholders of Berkshire Hathaway. According to Buffet to be a successful investor one should seek “economic castles protected by unbreachable ‘moats.’ ” 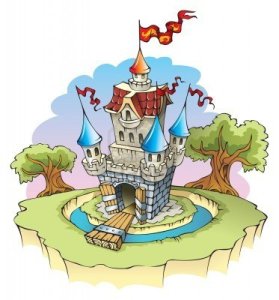 In medieval times, castle architects incorporated a variety of defenses and traps intended to slow, injure or kill attackers in order to hold the castle as long as possible, against even the largest attacking armies.

Buffet used the term Moat to describe the durable competitive advantage of a business. He compared it to the Moat that protects a castle. According to Buffet Assessing the Moat of a business involves understanding what kind of defense, or competitive barrier, the company has been able to build for itself in its industry.

An economic moat is a long-term competitive advantage that allows a company to earn oversized profits over time. Quite simply, companies with a wide moat will create value for themselves and their shareholders over the long haul, and these are the companies you should focus your attention on.

Why are Moats important ?

Moats are important for investors because any time a company develops a profitable business model by developing new product or service, other companies or competitors try to capitalize on that opportunity by producing a similar if not better product.

Existence of strong competitive advantage (a.k.a Moat ) makes it difficult if not impossible for competitors to enter the market and erode the profits.

How do you identify a company with a strong Moat ?

Economy of Scale or low cost producer in its area

Wal-Mart is perhaps the most salient example of a company benefiting from economies of scale, and for good reason. As a dominant player in retailing, the company’s size provides it with enormous efficiencies that it uses to keep costs low.

Waste Management companies or Railways have exclusive access/rights to lands which provides them with a strong competitive advantage against other companies.

Pharmaceutical companies and tech companies benefit due to patent protected technology or drugs that prevents competitors from entering the market segment.

Google is synonymous with search and it has captured the mindshare of the society. It’s hard for other players to grab search market share from Google

Linkedin and Facebook dominate their respective market segment as more people use the product, they become more valuable to the users. If all my friends are in Facebook why would I use any other social network.

As a software engineer I have worked on projects to replace or upgrade legacy ERP systems. I have noticed that most of the systems are easily replaceable except database (think Oracle) and SOR systems or Mainframes (think IBM) thats a huge advantage for these companies as the switching costs are too high for the customers.

Signs of Moat in a  Business