2016 can be best described as the year of surprises. This was also a year where most of the forecasters were proven wrong.  The first big surprise of the year was Brexit, the June 23, 2016, referendum whereby British citizens voted to exit the European Union. The referendum roiled global markets, including currencies, causing the British pound to fall to its lowest level in decades. We concluded the year with the election of Donald J Trump as the 45th president of United States of America.

The U.S. economy expanded at a 2.9% annual rate from July through September compared with the same time a year ago — the fastest economic growth in two years.

US unemployment rate fell to 4.6 percent in November 2016 from 4.9 percent in the previous month and well below market expectations of 4.9 percent. It was the lowest jobless rate since August 2007, as the number of unemployed persons declined by 387 thousand to 7.4 million while the labor force participation rate decreased by 0.1 percentage point to 62.7 percent. Unemployment Rate in the United States averaged 5.81 percent from 1948 until 2016.

Consumer prices in the United States increased by 1.7 percent year-on-year in November 2016, following a 1.6 percent rise in October, in-line with market expectations. It was the highest inflation rate since October 2014, mainly boosted by higher energy cost while food prices continued to fall. On a monthly basis, consumer prices rose by 0.2 percent after growing by 0.4 percent in October. Inflation Rate in the United States averaged 3.29 percent from 1914 until 2016, reaching an all-time high of 23.70 percent in June of 1920 and a record low of -15.80 percent in June of 1921.

The US home prices remained steady this year. After the downturn in 2009 U.S home prices experienced a big drop in their value and around 2012 they started going up steeply ( close to 10% a year). However, over past couple of years, the U.S home prices have appreciated 3-4% a year, which is normal.

The red-hot growth in home prices across the U.S. West started to slow in some cities as sticker shock and low inventory put off weary buyers.Denver, Los Angeles and Austin, Texas, have seen gains in real estate values moderate after years of double-digit increases, according to Zillow. A slowdown in the tech epicenter of San Francisco is becoming even more pronounced, with the median home value in August rising less than 1 percent from a year earlier. 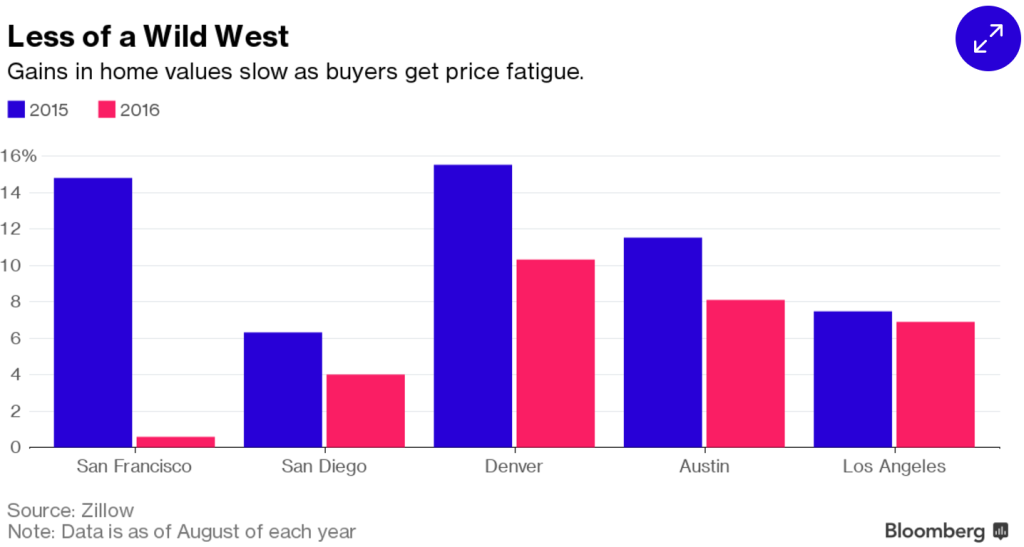 The Dow Jones industrial average was a standout performer, shooting up 13.4% and approaching the 20,000 point level right at the end of 2016. However many indices did well in 2016,

Russia’s RTS index has rallied by 52% in dollar terms since the start of the year.

Argentina’s Merval index surged 45% this year and hit a record high in October on the back of major political shifts in the country and an 18% crash in the currency.

Brazil’s Bovespa index hit a low in January that hadn’t been seen since the 2008 global financial crisis. But then investor sentiment turned around and the market caught fire, rallying 39%.

Like many global stock markets, the TSX Composite index in Toronto rallied from a January low and benefited from the so-called Trump bump. It’s up 17.5% this year.

London’s benchmark FTSE 100 index defied expectations and hit an all time high this year after Britain voted to leave the European Union. It’s up 14.4% since the start of 2016.

Italy’s main index — the FTSE MIB — dropped 10% as investors worried about the troubled banking sector. Shares in all the major banks dropped sharply and Monte dei Paschi was forced to seek a bailout after its shares fell by 88%.

Chinese stock markets also closed the year with double-digit losses following a gut-wrenching fall in early 2016 when key indexes lost between 25% to 30% of their value in a matter of weeks.The benchmark Shanghai Composite closed the year with a 12% loss. The Shenzhen market, which is traditionally more volatile, closed 15% down.

The year 2016 was a great teacher. It helped me understand myself better. Some of the key learnings are listed below.

Forecasts may tell you a great deal about the forecaster; they tell you nothing about the future. – Warren Buffett

Tom Gayner, the chief investment officer of Markel Corp, shared advice he once received from an experienced investor, this person who was a mentor to Mr. Gayner had once shared few words of wisdom and one of them was that you are a good investor if you survive in the markets for thirty years. Years like 2016 are a great opportunity for investors to sear in some of the words of wisdom from the investing greats like Warren Buffet. When Buffet discredits forecasting in his speeches and writing, you get it intellectually, but it’s still hard to not get tempted into believing some of the forecasts offered by so-called experts, but 2016 was a year when many forecasts by experts (e.g. economists) fell apart in public.

Return of the lemmings

In 2016 I observed that the fear of losing money was replaced by fear of losing out on returns, as investors desperate for returns piled into investment opportunities.

In the housing market (in Bay Area/ San Francisco) I observed

In the stock market, many value investors struggled to beat the market as the market defied gravity and engaged in a speculative bull run. Stocks of companies like Tesla, Amazon and Netflix continued to outperform the market even with high valuations. Those who stayed away from these stocks looked foolish at the end of the year. Greed is back in the market.

Markets can remain irrational longer than you can remain solvent. John Maynard Keynes

One of the challenges of being contrarian is that you have to look foolish for a long time while you wait for your hypothesis to play out. Whether you are an investment manager or an individual investor (i.e. regular Joe), you are answerable to your stakeholders (i.e. your investment partners and family). Without their support and confidence, you can’t stay rational. Most of us face this challenge in our lives, educating your key stakeholders and having a support group who can act as a sounding board is critical to your success as an investor. I came close to breaking some of my investing rules in 2016, but thanks to the group of fellow value investors and my checklist I recovered from my temporary insanity.

I hope you had your share of learnings and “aha” moments in 2016. I would appreciate if you share it with me by posting your comments on this post or emailing me. I wish you a happy and prosperous 2017.