A lot has happened around the world in the past 12 months, 2015 was an eventful year. For investors and entrepreneurs there is no better way to learn than from observation and reflection. I think 2015 was a great teacher as it busted many myths and humbled many investors.

Overall It was a mixed year for U.S economy

The U.S. economy only grew 1.5% between July and September of 2015, according to the Commerce Department. Growth slowed a lot from the 3.9% pace recorded in the second quarter this year.

It is also much lower compared to the third quarter of 2014, when the economy grew 4.3%.The global economic slowdown and strong U.S. dollar weighed down on manufacturing, trade and exports.

The unemployment rate continued to trend downward at 5% by end of Nov 2015 compared to almost 6% the previous year. 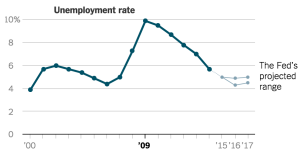 US Housing Recovery Remains Strong Despite Stock Market Swings, China’s Swoon – Some consider this an outcome of easy money policy by the Federal Reserve.

The charts below track the median home prices in U.S and price to income over past ten years. It is evident that the housing market is recovering but there are signs of the real estate maeket heating up in some areas, specially San Francisco and New York 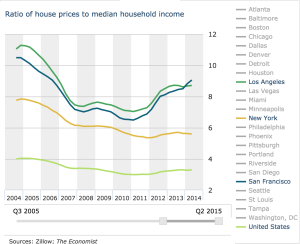 The Tech sector is firing on all cylinders and saw many high profile IPO’s this year – Some of the value investors including Prem Watsa and Mohnish Pabrai have been warning about tech bubble 2.0 in the valuations of a group of social media stocks.

The Wall Street Journal says that worldwide there are 73 companies that are valued at more than $1 billion by venture capital investors, versus half that number prior to the dot.com crash. The third column of the table above shows the ratio of the latest valuation of each company to its total cumulative equity funding raised from inception. So Uber has a valuation of $41.2 billion as compared to the cumulative equity capital raised of $2.8 billion – i.e., the valuation is a hefty 14.7 times all of the money that was raised by the company. We’re confident that most of this will end as other speculations have – very badly! – Prem Watsa

During the annual meeting of Dhandho Holdings and Pabrai Funds Pabrai compared today’s stock market to that of mid 1970’s, when there was a one dimensional market,with the Nifty-Fifty stocks attracting disproportionate amount of capital resulting in a two tired market. This was evident by the high price to earnings (PE)  ratios of some of the Nifty Fifty companies during the 60’s 70’s.

Today we might be reliving the Nifty-Fifty high valuation for some of the growth companies while stocks of many sound businesses on the indexes languish. A quick look at the price to earnings (PE) ratios of some of the super stars in todays market will illustrate the point.

Companies like GM and AIG, which were at the epicenter of the financial crisis during 2008/09 are riding on the US recovery

Altogether, accounting for both the TARP and the Fannie and Freddie bailout, $618B has gone out the door—invested, loaned, or paid out—while $390B has been returned.

The Treasury has been earning a return on most of the money invested or loaned. So far, it has earned $291B. When those revenues are taken into account, the government has realized a $63.2B profit as of Dec. 21, 2015.

Fed finally raised its benchmark interest rate by a quarter percentage point. Even-though it is symbolic, the move by Fed was seen as a vote of confidence in U.S economy.

The Fed cited job growth as a key reason for raising rates, however officials remain concerned about sluggish inflation, which is both a sign of economic weakness and an impediment to faster growth. 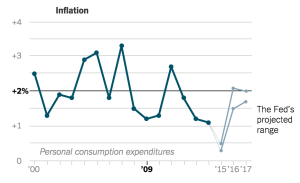 However as you might expect 2015 was not good for all sectors and economies.

1. The oil shock – It broke many supports on the charts and destroyed many investments and companies. For the first time in many decades the OPEC ( Organization of Petroleum exporting countries ) is ineffective. My thoughts on slump in oil prices here.

2. The China slowdown – After nearly two and half decade of phenomenal growth China is showing signs of slowing down. Investors are worried about the bursting of not one but two bubbles, first the housing and than the stock market. Economists are expecting negative impact on the world economy due to slowdown in China. According to IMF global growth will be disappointing in 2016

3. Greece grievances – Greece’s never-ending financial crisis loomed large after the left-wing party Syriza came to power in January elections on a pledge to stand up to their mostly western European creditors and their demands for more austerity.After a monthslong standoff, Greek Prime Minister Alexis Tsipras largely agreed to creditors’ demands in July,restoring calm to European markets.

4. Junk bonds made really scary headlines when Third Avenue Focused Credit closed down its fund amid flood of redemptions. The iShares iBoxx High Yield Corporate Bond fund quickly nose-dived, and was down 12% year to date. The news spooked investors who pulled more money out of bond funds. Last week saw the biggest outflow from bond funds since June 2013.

There is no shortage of forecasters predicting the events that might unfold in 2016 – They range from complete economic collapse to third world war.  As investors it is in our interest to apply what Haward Marks calls “the second level thinking” to understand risk and opportunities that lie ahead. I recommend reading his recent interview where he shared his thoughts on financial markets and risk.

I look forward to 2016 as a student of investing and business, I am sure we will be presented with lots of opportunities to learn and hopefully prosper. I wish you the best in your investing, business and life. Happy New Year 2016.