The recent slump in oil prices took most of us by surprise. Oil prices have been on the rise since 2004 with a drop in the price of oil for a short period during the great recession of 2008/09.

Many investors assumed that this trend would continue and crude oil prices above $100 per barrel were considered the new normal.

Experts point to many causes for the recent drop in oil prices, including the conspiracy by the Saudis to undermine the dominance of U.S shale companies in the world oil market and the joint effort by the U.S and its partners to put pressure on Putin and Russia by keeping the oil prices depressed for a long period.

In this post I attempt to describe the oil market and its players. I hope this will help you understand the recent slump in oil prices.

Picture is worth a thousand words – Light crude prices over the past 10 years.

Is it a supply problem?

The table below shows world production and consumption.

Who is contributing to the increase in oil supply since 2009?

Increases / (decreases) in oil production by region/country by the end of 2013 :

Increases in US oil supply

Shale Oil production in US

What is causing the price slump ?

There have been periods in the past when supply and demand were not balanced but we did not see a steep drop in oil prices except in 2009, which was during the great recession. In 2013 and 2014 supply and demand were not out of balance ( see tables 1 and 2 below for details ). However there are signs of a slowdown in many economies across the world and oil prices might be a leading indicator or what will follow or it might be an overreaction by the markets.

The OPEC has less price control than we thought

The emergence of many shale oil producers has ensured stand-by supplier ready to take advantage of attractive oil prices. With the emergence of shale oil, US Oil production has become more similar to a standard manufacturing industry,it is easy to control supply based on the demand curve, which was not possible with the deep water exploration.

Oil prices beyond $100 are not sustainable in the short run

In oil industry the hard to get oil is generally known as “tight oil”, most of the tight oil are profitable to explore when oil prices are above the $30-$40 range ( see chart below ). Whenever oil prices go above $50, tight oil exploration will start to look attractive.

The low-cost producers will do well in the long term

The chart below from Citi’s Ed Morse lists the average cost of oil production by country and production type. 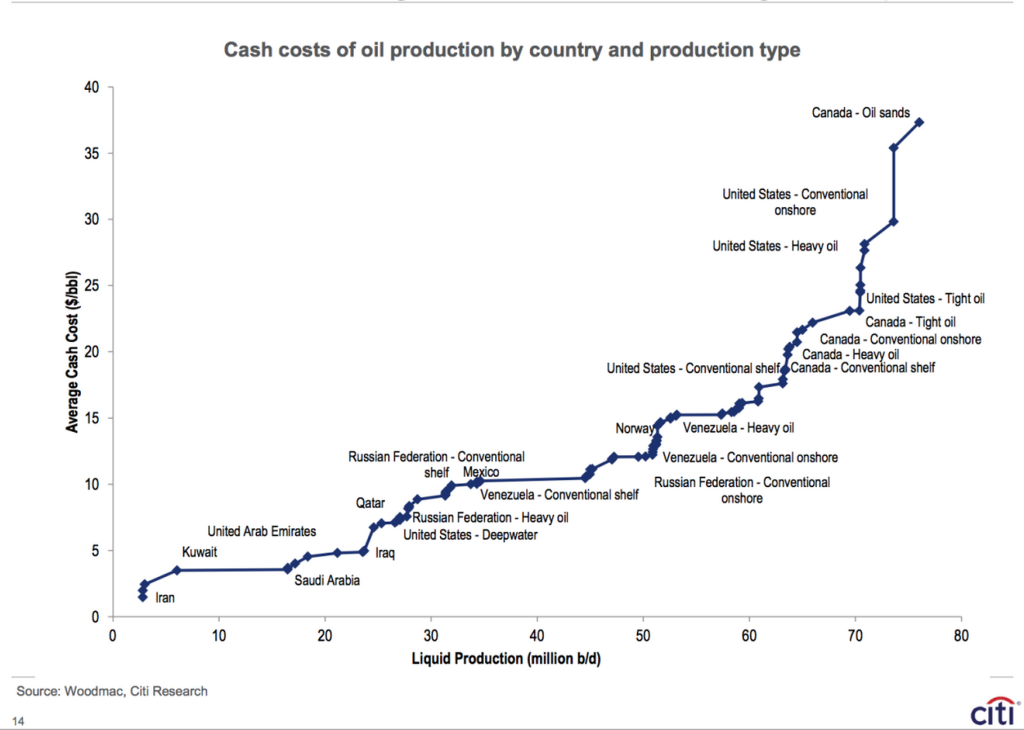 Oil is a cyclical business

Disclosure: I own shares in Exxon Mobile, Conocophillips and Phillips 66 . If you are interested in my analysis of oil companies (specifically Exxon Mobile) contact me on twitter