This past weekend I was in Omaha to attend my third Berkshire Hathaway annual shareholder meeting. Most of the information about the annual meeting is available online, and many bloggers provide live updates of the meeting. 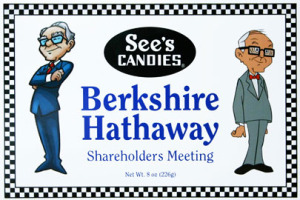 Attending the annual shareholder’s meeting is a pilgrimage for many capitalists and value investors, many call it the woodstock of capitalism.What brings thousands to this sleepy town is the shared values and camaraderie. I have met many sharp investors and interesting people there. Some of them have become good friends over the years and I look forward to catching up with them every year and making new friends.

For the uninitiated, this annual trip made by thousands of shareholders of Berkshire Hathaway from around the world may not make much sense, since much of the buzz is about the four hour question and answer session with Warrn Buffett and Charlie Munger, the chairman and vice-chairman of Berkshire Hathaway. Most of the content is available online one might wonder about the value of attending the meeting in person.

I have thought about it and the best answer lies in one of Buffett’s quotes.

The value you get out of this meeting depends on who you are and what brings you to Omaha. For many investment professionals it’s an opportunity to network or even sell their funds or services. Many fund managers hold their annual meetings and seminars the day before and after the annual meeting. But this group is a minority compared to the thousands of shareholders who attend the meeting every year. Most of them are not investment professionals. Far from it. They are ordinary people in a variety of professions including doctors,engineers,professors,civil contractors, business students, insurance agents, government employees and many more.

For many it’s an opportunity to meet their friends and celebrate a way of living they all cherish. There are many informal gatherings of shareholders without any agenda to sell investment services or products. One such gathering is organized by Yellow BRK’ers. It is a Happy Hour with a casual atmosphere. You can grab a drink and mingle with fellow Berkshire shareholders from all over the world. They meet on Friday, the day before the annual meeting at the DoubleTree Hotel in Omaha. This year there were over 300 attendees.

One of the best opportunities to meet true Buffett followers is at the south gate of CenturyLink convention center on the day of the annual meeting. The gates open at 7:00 a.m., but the line starts forming at 4:00. Guy Spier writes about his experience in his book “The Education of a Value Investor”

Instead of showing up in my jaded and superior Oxford-Havard-New York mode, I allowed myself to let go and join the fun as just as another Buffett fan and disciple. On the day of the annual meeting itself,I no longer strolled in at 8:00 a.m. start time so that I could avoid the rush. Instead, I began to get up at 5:30 a.m.so that I could join the hard-code faithful in a lin by the south door of the convention center.

As a result, I would find myself sitting with Mohnish and at the fornt of the room, enjoying a perfect view of Warren and Charle. This was a much better place from which to learn then the back row,where I had previously been a more passive and even judgmental observer. As I had come to realize, if you’re going to do something, it’s best to commit to it with wholehearted gusto.

I arrived at the convention center at 4:00 a.m. with my friends and fellow shareholders. There were a dozen folks ahead of us. The only other place you would see this level of excitement about the opening of a door is at the Apple store before the release of a new iPhone or Apple watch!

True to his word, Guy Spier joined the line along with Mohnish Pabrai early in the morning. It was great to meet Guy in Omaha. He is the Managing Partner of Aquamarine Capital, an investment partnership inspired by, and styled after Warren Buffett’s 1950s investment partnerships. I interviewed Guy Spier with my friends Preston and Stig at theinvestorspodcast.com 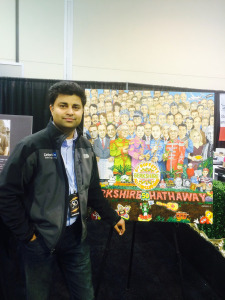 This year Berkshire is celebrating its 50th anniversary. At a board meeting in early May of 1965 Buffett Partnership Ltd. formally took control of Berkshire Hathaway Inc. At that time,the company was a northern textile manufacturer, operating in an industry that had been in steep decline for some years.

Warren Buffet and his partner Charlie Munger turned a failing textile mill into a successful conglomerate with a market cap of $364 billion by using their investment skills and business acumen to acquire many quality businesses over the past fifty years. Today many world famous brands and companies call Berkshire their home, including See’s Candies, GEICO, Mars, Inc., Fruit of the Loom, BNSF Railway, Dairy Queen, Lubrizol, and NetJets

Buffett and Munger have created a unique culture at Berkshire. Their signature is evident in every aspect of the company and its subsidiaries. They have conducted themselves in a way that has helped them attract great businesses and talent. You can feel that sprit when you attend the annual meeting.

Both Buffett and Munger have led by example, and their actions truly speak louder than their words. Berkshire’s headquarters employs just 25 people and occupies two floors in Kiewit Plaza — a testament to Buffett’s decentralized management structure, which trusts business unit leaders to make the best possible decisions with minimal bureaucracy.Buffett sill lives in the home he bought in 1958 for $31,000.

Most of us know Buffett for his investment acumen, but when you attend the annual meeting you can witness his other side. Buffet the CEO and an inspiring leader. He misses no opportunities to highlight the accomplishments of his employees and acknowledge their contributions. His self-effacing humor and his grandfatherly warmth towards his managers and employees is evident throughout the meeting and in his annual letters to shareholders. He addresses negative news and poor performances without naming any names, but also without leaving any room for doubt.

He has a very clear message to all the 300,000 employees of Berkshire Hathaway.

This message from Buffet’s testimony before the subcommittee on the conduct of Salmon Brothers, Sep 4th, 1991 was played during the opening of this year’s annual meeting.

For years the annual shareholder meeting of Berkshire Hathaway was a nonevent. less than a dozen people attended this meeting  in 1981. The meetings used to be informal and were usually hosted in the a cafe. The highlight was the questions and answer session, where Buffett and Munger answered questions from the shareholders. The number of attendees has grown over the years. This year over 45,000 shareholders attended, but the format hasn’t changed much.

The doors to the convention center where the annual meeting takes place opens at 7:00 a.m. The meeting starts at 8:30 a.m. with a movie, especially directed and produced for the meeting. It is usually half an hour long and is light-hearted. Both Buffet and Munger act as characters along with guest appearances from many celebrities. Each year there is a theme and the movie is very entertaining.

At 9:00 a.m. the eagerly awaited question and answer session starts.In recent years the task of gatheringand filtering questions has been assigned to a group of journalists and investment analysts lead by Buffet’s longtime friend and the former editor of Fortune magazine, Carol Loomis. The session lasts for over four hours with a short break for lunch at noon. Multiple stations are available for the audience to ask their questions. Buffett answers questions from the journalists , investment analysts and the audience. Buffet and Munger are not aware of the questions that will be asked before hand.

The question and answer session is followed by the formal annual meeting procedures, which lasts less than half an hour. At 4:30 PM the meeting is adjourned and most shareholders  head toward the exhibit hall.

One of the favorite stalls in the exhibit hall is the one for See’s candies.The mascots of GEICO and Fruit of the Loom are present every year, many shareholders line up to get their pictures taken with the mascots. The pre-fabricated home by Clayton Homes with a price tag of $65,000 and luxury RV’s by Forest River are crowd pullers. One of the special attractions is a stall for a local bookstore, BookWorm, where books recommended by Buffett are on display.

On Sunday, the day after the annual meeting, Buffett signals the start of a 5k race sponsored by Brooks Sports Inc., a Berkshire-owned company in Omaha. Many shareholders participate in this event. Fund managers hold investor gatherings in the Hilton Hotel next to the CenturyLink convention center. Shareholders hangout and have lunch with friends and family.

Visiting Omaha for the annual meeting of Berkshire shareholders is a unique experience. I hope to be there next year.